Looks like another lovely day. I hope you yours' is bright, too! Enjoy! 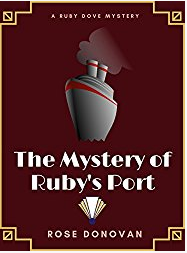 A ship full of suspects awaits Ruby and Fina. Will they find the murderer before their own secrets are revealed?
Spring in the Caribbean, 1935.
Cruising to disaster, Ruby Dove and Fina Aubrey-Havelock face down a murderer who is slowly crossing names off the passenger list.
As the SS Sanguine sets sail from the Bahamas, Ruby and Fina eagerly await the excitement promised once they dock in Trinidad. Ruby pays her way as an apprentice to a French designer and Fina tags along as a governess to a wealthy widow’s son. Ruby’s brother has also asked them to find a secret contact on board. Which passengers are genuinely eccentric and which are covering their true intentions?
Soon they have two mysteries on their hands…their contact and a killer.
In a race against time, Ruby and Fina are thwarted by stormy seas, subversive stewards, sordid scandals, salacious seances, scary scorpions and suspicious swine. They know all too well how many lives hang in the balance should they fail both their missions.
If you like cozy historical mysteries with a twist, then you’ll love Rose Donovan’s fashion-spy-amateur sleuth heroes, Ruby Dove and Fina Aubrey-Havelock.
The Ruby Dove Mystery Series:
The Mystery of Ruby’s Sugar (#1)
The Mystery of Ruby’s Port (#2)
Pour yourself a crisp beverage and escape into The Mystery of Ruby’s Port this evening. 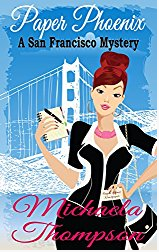 Paper Phoenix: A Mystery of San Francisco in the '70s (A Classic Cozy--with Romance!)

…or at least sweet thoughts of murder. Maggie Longstreet has plenty of them after slimy, ambitious Richard trades her in for a more recent model. She’s so depressed she can barely get out of bed when Larry Hawkins, a seemingly not-at-all depressed acquaintance, commits suicide out of the blue. Suddenly Maggie goes on high alert, remembering something her evil ex said about Larry—something highly suspicious.
And from there, it's just a short segué to a bracing new development:
“When some women get divorced they go back to school, I thought. Some do volunteer work at the hospital, or join communes and learn to birth calves. Some have affairs with inappropriate men. My new interest is burglary. Maggie Longstreet, former wife and mother, past president of the Museum Guild, now starting a career as a second-story woman.”
Fortunately, Maggie isn’t alone in her adventure—a very attractive, much younger man proves a lot more fun than Richard ever was. In fact, the real delight of this witty, sly mystery is seeing Maggie come alive again after a suffocating marriage. Set in the’70s, it has a bit of that Mad Men feel of women on the brink of something big. And completely unexpected 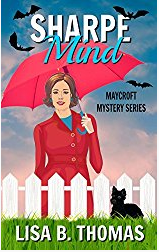 WHO KNEW KNITTING COULD BE DEADLY!
Former teacher turned reporter Deena Sharpe craves more adventure than covering dull city council meetings in the small town of Maycroft, Texas. But when she follows a hunch to investigate a story lead, she finds a dead woman strangled by a knitted scarf and becomes suspect number one.
To make matters worse, a new psychic in town has residents on edge. Strange happenings multiply as quickly as the list of murder suspects, and Deena finds herself with more adventure than she had bargained for. No pedicure is too painful and no dumpster is too deep as Deena seeks to unveil the killer before anyone else gets hurt.
Sharpe Mind, Book 2 in the Maycroft Mystery series, offers readers a healthy dose of intrigue along with a generous sprinkle of humor. If you like a mystery with good, clean fun, cozy up to Sharpe Mind today! 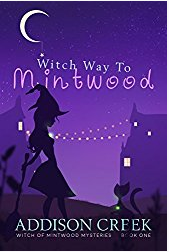 House falling down? Check. Pet sitting job with annoying clients? Check. Ability to speak to ghosts, which has the unfortunate side effect of having to listen to what they say back? Double check! Hot high school crush still in town being all successful and stuff while you protest his building projects? All kinds of checks! Did anyone say Witch of Mintwood? Yup! Just add murder and this will be a week to remember!

In moments of surprise we catch at least a glimpse of the joy to which gratefulness opens the door. ~ David Steindl-Rast
Posted by QuinGem at 7:42 PM