This evening's reading selections are several cozy mysteries and a cookbook! Enjoy! 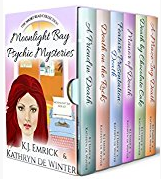 Miranda Wylder is on her way up. Life is good for the Psychic/Medium Crime Novelist with one successful novel already and a second on its way up the charts.She likes to fly under the radar where her psychic abilities are concerned, preferring to be known only for her writing ability. But when her best friend, Kyle Hunter, is killed right in her own backyard everything about her life changes. Accused of his murder she must use her psychic abilities, along with help from Kyle's ghost, to solve his murder.Now that everyone in Melbourne knows what she can do Miranda flees the city to go live in Moonlight Bay. She hopes that she will be able to live a quiet life there where nobody knows what she can do.How wrong could she be?

This is just the beginning...!Box Set 1 includes Books 1-6 in The Moonlight Bay Psychic Mystery Series:Book 1 - A Friend in DeathBook 2 - Death on the RocksBook 3 - Feature Presentation: DeathBook 4 - Manor of DeathBook 5 - Death by Chocolate CakeBook 6 - A-Maze-Ing Death 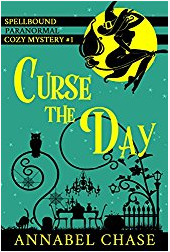 The only magic Emma Hart believes in is caffeine and the power of the dryer to lose one sock per load. A public interest lawyer buried under a mound of student debt, Emma’s whole life has been one turn of bad luck after another. Her streak seems to continue when she gets lost on the way to see a client in the remote Pocono Mountains. A chance encounter with a suicidal angel lands her in Spellbound, a town where supernaturals have been cursed to remain for centuries--probably not the best time for Emma to discover that she's actually a witch. Between the recent murder of the town’s public defender, a goblin accused of theft, remedial witch classes, and the attention of one smoking hot vampire, Emma struggles to navigate this unfamiliar terrain without losing her mind...or her life. Curse the Day is the first book in the Spellbound paranormal cozy mystery series. This is a full-length, humorous paranormal cozy mystery novel.Other books in the series include:Doom and Broom, Book 2 Spell's Bells, Book 3Lucky Charm, Book 4Better Than Hex, Book 5Cast Away, Book 6A Touch of Magic, Book 7A Drop in the Potion, Book 8Hemlocked and Loaded, Book 9All Spell Breaks Loose, Book 10 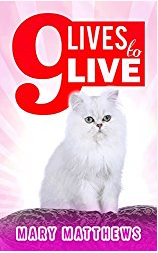 When you're a cool cat detective, you only live nine times but if you live them right, nine is enough to solve the mysteries of the universe. Cool Cat Sleuths, Tatania and Zeus, find clues as intoxicating as catnip, and help their humans, fun loving 1920s detectives, Grace and Jack, unravel a mystery of switched identities that reveals another one of Tatania's nine lives without missing a nap. Excerpt from 9 Lives to Live:"While Grace slept next to Jack, Tatania relaxed on Jack's chest and swished a tail in Grace's face. She liked to remind Grace that she met Jack first. "The Magical Cool Cats Mystery Series can be read in any order. If you'd like to know the chronological order of the series, here it is for you:**Splendid Summer**Emeralds, Diamonds, and Amethysts**Cher Ami**Available exclusively in Grace, Jack, & Magical Cats Boxed Set Vol I.Meow BabyCupcake KittyMeow or NeverCatty CornerCat Dance9 Lives to LiveMEWOWThe Fur Will FlyRight Meow 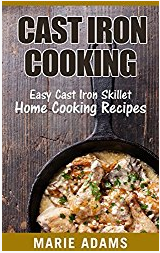 Cast iron cookware is great because of its versatility. It allows you to cook meals in one simple piece of cookware that would normally require all sorts of pots and pans. You can easily use cast iron on the stovetop for sautéing, stir-fry’s, and soups, or use it in the oven, or both. Using cast iron is particularly helpful since you can cook your proteins and veggies, from stovetop to oven, all in one dish.Although cast iron cookware has been around for several hundred years, its popularity has made a resurgence as more and more cooks of the new age are embracing the ease of this traditional cookware and incorporating it into their busy lives.Inside, you’ll find:•All the information you need about seasoning and caring for your cast iron cookware.•Learn about the many health benefits of cooking with cast iron cookware.•Lots of cast iron cooking tips•158 recipes for breakfast, lunch, dinner and desserts•Delightful breakfast recipes like the Breezy Brunch Skillet and the Farm House Breakfast•Satisfying poultry recipes such as the Spinach Stuffed Sundried Tomato Chicken, the Kung Pao Chicken, and the Turkey Pot Pie•Bountiful beef recipes like the Skillet Lasagna, the Simply Delicious Beef Chili, and the Cast Iron Roast Beef•Wholesome pork and lamb recipes such as the Grilled Pork Quesadillas, the Mushroom Pork Chops and the Lamb and Butternut Squash Stew•Delicious fish and seafood recipes such as the Shrimp Piccata, the Pecan Fried Catfish, and the Spicy Lemon Whitefish•Tasty vegetarian and side recipes like the Root Vegetable Pot Pie, the White Bean and Southern Greens Chili and the Creamy Zucchini Slides•Comforting soup recipes like the Bacon Potato Winter Soup and the Grandma’s Chicken Noodle Soup•Luscious dessert recipes like the Caramel Apple Cake and the Raspberry White Chocolate Dump Cake

The best and most beautiful things in the world cannot be seen or even touched. They must be felt with the heart. ~ Helen Keller
Posted by QuinGem at 9:52 PM